I rarely celebrate any Jewish holidays, as I am not religious at all. However, I grew up loving Russian Jewish food because that’s the ancestry of half of my family, My family  decided to get together this past weekend, and we decided to make food inspired by Rosh Hashana for it, since it starts tomorrow night (The evening of September 4th, 2013) and is close enough to when we got together since we don’t see each other very often.

So when I heard we were doing this, I started looking around for what in my mind was classic Jewish food, with the intention of veganizing it. I looked in a lot of the cookbooks I own by Isa Chandra Moscowitz as she has a lot of good stuff like that hidden throughout her cookbooks (mainly Veganomicon and Vegan with a Vengeance) and finally decided on a menu.

I ended up making:

My Reviews of it all:

A rating of 5 good Bananas is the highest rating! Woohoo! Seitan Brisket recipe! This means it was amazingly delicious and I wanted more. This means even my aunt, who eats meat and isn’t used to fake meats at all, ate it and said it was really delicious (especially the sauce)! I would gladly make it again, even though it took me two days  to do so! 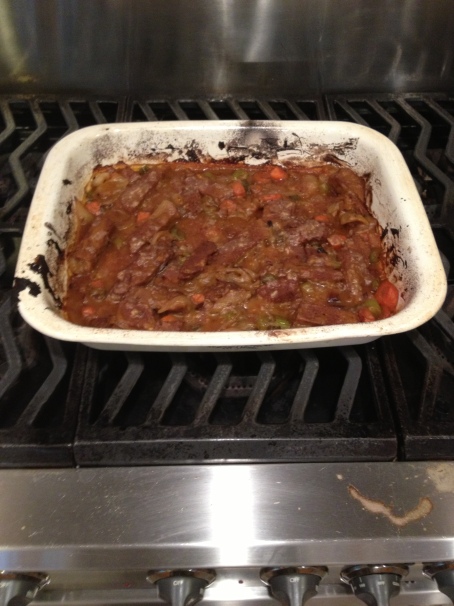 A few tips if you decide to make it yourself? If using the recipe in the Vegan Sandwiches book for the home-made Moo Free seitan, I cooked it in the slow cooker, that way you can forget about it all day basically and go about  your business as normal. However, place it in the fridge when you go to bed so it’s ready and cool the next day. Then slice and prepare the rest of the stuff on the Earth Balance recipe. I used grape juice instead of red wine (I’m sort of straight edge but I cook with wine occasionally. I wanted to try the grape juice though to see if it worked and it worked amazingly,) I also used white miso for the glaze.

If you don’t want to go through the hassle of making your own seitan (I contemplated it) you can try storebought. You could also substitute any beef like basic seitan recipe instead. With either of those changes though, I can’t guarantee you’ll get the same 5 good bananas rating results that I had 😛

I hate to give my worst rating to a recipe right away, but I’m giving this the rating of one good banana, 4 bad bananas! 😦 Partly this may have been my fault, because I was really spacey the day I made it, and used 3 matzos instead of 4, and forgot the onions, and left out the lemon juice. However, the way the recipe was written it was easy to forget the onions, but the lemon juice was totally my fault. Despite my botched attempt at making this recipe, I think it would not change much had I done it right. It’s a hunch…but the matzo makes it have this weird taste and it just was too spinachy or something. I wish it was better. Like it has the potential to be a bit creamier like a spinach souffle or the like, but it’s really off-putting. I don’t even want to eat the rest of it that is left over… 😦 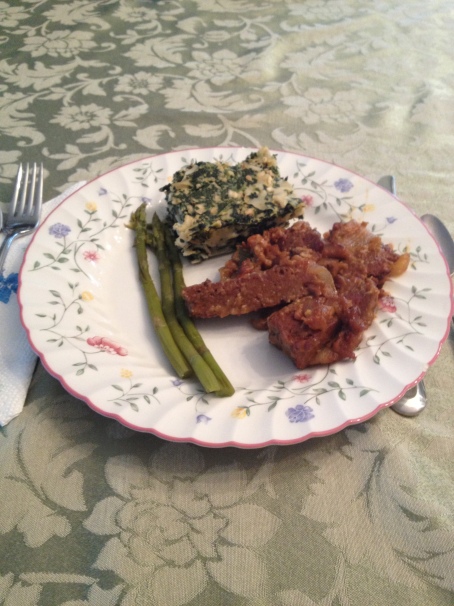 the kugel along with everything else on the plate

Oh, and I used a Stop and Shop brand of egg-free noodles. They’re the same shape as the egg kugel noodles, but I verified to make sure they were vegan.

Well I’m rating these delicious vegan Jewish Holiday pastries that I grew up with (except not vegan at the time) four good bananas and one bad! It loses one good banana simply because I think they could be slightly better. The recipe doesn’t instruct how to get the classic rugelach shape correctly, which I’m more than okay with because they still taste excellently good, but I think the dough may also need a tiny bit of work, as it’s softer than the real rugelach I remember. Otherwise, it’s basically the real deal. The chocolate filling option is amazingly authentic and so tasty! 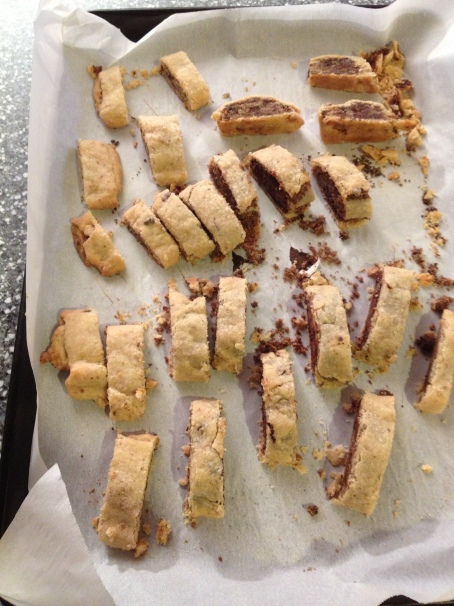 one out of two baking sheets it made of these babies!

It was slightly challenging to clean the food processor after making these, as well as really hard to roll out, I didn’t slightly flour the surface, I heavily floured it. Except for some of the jelly rolls I made unrolling a bit in the middle, though, I am very happy with it. It makes a ton! I made exactly 48 cookies. Don’t eat a ton of them all at once, as they’re about 100 calories a pop (more on how I calculate this later on in future blog posts).

That’s it for this post today! Hope you enjoyed it! And if you’re Jewish (or not), Happy New Year !

P.S.: Since this is my first ever blog post, don’t forget to check out the about me page on my blog here