Well, this week was rather slow as far as my cooking was concerned. Oh well.

Aside from making my Caesar salad several times this week (see my post before this one for details), the other two meals I cooked this week were jackfruit “carnitas” tacos and quick “buttery” biscuits and a southern black eyed peas skillet.

While I cannot share the recipes as they’re both in published cookbooks, I can share what they the pictures, and a review of them! 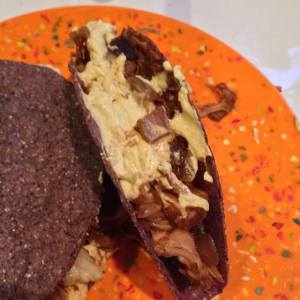 These were from the book The Vegan Girl’s Guide to Life by Melisser Elliott. I halved the recipe because I had only one can of jackfruit and it came out fine and made a good amount, still. I used store bought blue corn hard taco shells, put some lettuce inside, the “carnitas” and a cheese sauce I invented which was basically the easiest thing in the world: a 2:1 ratio of tofutti sour cream to nutritional yeast.

As far as the recipe goes,  I was a little concerned at first that it might be too spicy for the likes of me. I can handle spicy, but not straight up full jalapeno flavor. Luckily, after being reassured my Melisser herself on twitter after I announced I was making these, it seemed like my mouth would not be on fire after eating these. The main ingredients are various spices appropriate to tacos, salsa verde (the one I used came in a can, made by a brand called Embasa, and the first ingredient is tomatillos, not jalapenos, phew!) and the jackfruit of course. There’s some other stuff in there too, but I don’t want to give it all away. The book can be found on Amazon and it is a really helpful guide to a lot of vegan girl stuff, not just about food.

This was a better jackfruit experience than my first one which had more of a sweet and overly acidic barbecue flavor that did not go so well with the jackfruit’s flavor.

I liked this one because the spices and sauce really complemented and contrasted the sweetness of the jackfruit. Also, it is the perfect texture for going in the taco. I liked my addition of lettuce and cheese sauce though, as this recipe definitely goes great with various yummy taco fixings.

The Southern Skillet Black-eyed Peas with Quick Buttery Biscuits recipe from my (probably favorite) cookbook Chloe’s Kitchen by Chloe Coscarelli is one of my favorite recipes I’ve found as a vegan cookbook connoisseur.  It is an extremely comforting dish, and the biscuits don’t hurt that factor one bit.

It has cauliflower, black eyed peas, tomato sauce, maple syrup, sweet and savory spices, onions, etc in it. It ends up cooking pretty thick when I make it. I love that because I’m not a big soup eater, but it’s probably possible to leave it more brothy if that is more your style. Either way, it’s delicious.

I like making the biscuits in the food processor because it’s unbelievably easy that way! At least for me, they’re basically fool proof.  Like my conversation on twitter with Melisser Elliott, I also told Chloe Coscarelli on twitter a week ago or so that I wanted to make this again. It’s really pretty rare that I’ll repeat recipes often, but for some reason Chloe’s recipes make me want to make them much more. She was so nice to me and grateful for me sharing how much I love this and the Matzo Brei, and further confirmed why she’s one of my favorite vegan cooking “celebrities,” of sorts. I’m a vegan cooking nerd, deal with it 😛