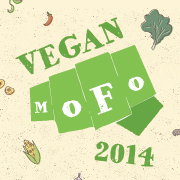 I am participating in Vegan Mofo 2014! I have a whole month’s worth of amazing recipes and other food related blog topics almost all set to go! I plan to also post a blog tomorrow, in which I will explain my theme and some deeper things I am hoping to address by participating in this, as well as a personal update on how my Summer went and what I’m looking forward to for the future.

But for now? I just found out today is International Bacon day, which isn’t very vegan, but I’m all about bacon type flavor without the cruelty! I am always in search for the best smokey savory flavor of it, as well as trying to replicate the texture. For a recipe that will be coming up in the days of September and Vegan Mofo 2014, I felt the need to create a new type of vegan bacon.

This idea initially came to me in July when I was talking to a group of volunteers at Girls Rock! RI after a long day at the girls’ camp, and while we were discussing the days events, there happened to be some seaweed snacks around (I was responsible for making sure snacks were always out and available). Some of us were encouraging the organization’s intern to try it, and she was a bit hesitant. I was trying to describe the flavor to her, and all of a sudden, I said to another person next to me, “I’m surprised vegans haven’t found a way to make bacon out of it, they’ll make bacon out of anything!” Thus, I was now on a quest to create vegan bacon out of Nori seaweed.