For my 30th birthday, which happens to be today, I had a bunch of fun stuff planned. The biggest thing was my run last weekend, in which I lived up to my blog’s name, and ran in a banana suit in the Providence (RI) Monster Dash 5k. I made a PR by about 2 minutes and it was soooo fun running in this costume: 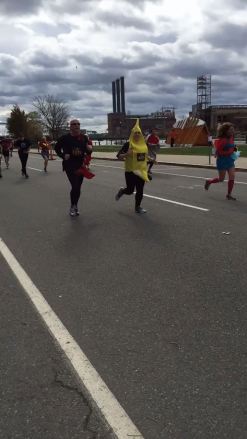 It was a big hit with kids, especially. When I ran through the large crowd of people cheering us on, so many kids along the way would exclaim “there goes the banana!” And many of them put their little hands out to catch a high five from me as I ran past them…it was so cute. I waved to several of them, and even had a trifecta of 3 little kids put their hands out all at once that made me feel like I was a celebrity working the crowd. Haha. So that was cool, and I also plan to use this banana suit for more things for this blog, to make it funnier. You’ll see what is in store for it soon!

This morning, I made birthday cake waffles. I had some left over chocolate sauce from my candy apples and some strawberry syrup left from the strawberry frosted donut recipe that I put on top. Yum.

Mix all ingredients together and follow waffle iron’s directions to cook them. Makes about 5 waffles depending on your maker.

Tonight my family is making me a vegan vanilla cake, with raspberry filling and chocolate buttercream. I am making vegan crockpot buffalo ranch lasagna from this recipe for my dinner. I will share pictures later in a new post, maybe.

Also, I got three new cookbooks for my birthday present:

So far I have looked in Chloe’s book the most, and I was seriously drooling after that. I will be cooking out of these for awhile in the next few weeks I think, so get ready for me sharing some reviews and pictures! 🙂