This week I only made about 3 big meals and had leftovers the rest of the week (except for breakfasts which was mostly french toast and other un-exciting stuff).

First, I made the Indian Buffet Trio (Saag Aloo, Chana Masala, and Vegetable Biryani) from the Chloe’s Kitchen cookbook. 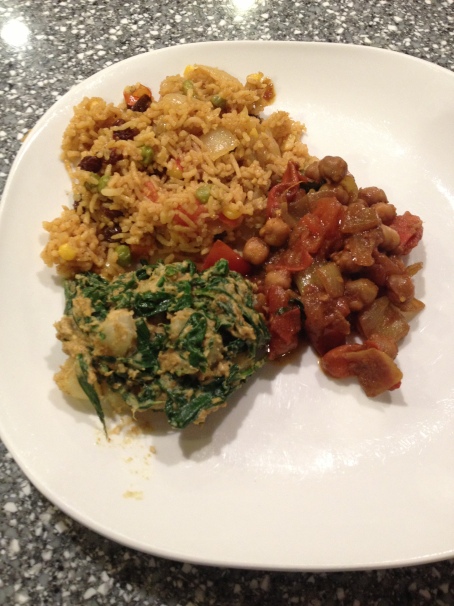 It was really good, all of it but I especially love the Saag Aloo that’s made with cashew cream (which came out awesome in itself!). I think I may have slightly messed up the Chana Masala by being forgetful. I really like the biryani, the raisins make it really good and I normally will not touch them ever…so that was a nice surprise.

I give this a 4 good bananas, 1 bad rating

I also made jackfruit for the first time! I made a bbq pulled pork style crock pot thing from the newly released cookbook by Natalie Slater, entitled Bake and Destroy. The dish is called “Cannibal Corpse Crock-Pot” which I think is pretty hilarious. I unfortunately forgot to take a picture of just the pulled jackfruit, but I did take a picture of it when I made another entree from the cookbook called simply “BBQ Salad.” It’s kale, red beans, onions, garlic, the jackfruit, brown rice, and vegan ranch dressing.

I rate the salad 4 good bananas, 1 bad, but the Cannibal Corpse Crock-Pot by itself would probably get a 3 good banana rating

The jackfruit itself is quite surprising. I had it alone in a sandwich to get a good idea of how it is by itself. It’s texture is not as “meaty” as people have been saying, in fact pineapple may have more of a meaty texture than jackfruit. Though, it does give a good shredded pork appearance. It’s also quite tangy and sour. Personally, I don’t think using a ketchup based BBQ type sauce was the best idea to pair it with, just because I have problems with acid reflux, and so it was a bit too acidic all combined. I might try it with a more typical type of BBQ sauce some other time and see how it goes. I do have another can I want to try and experiment with!

In the salad though, it was much better. All the flavors combine and it is just really yummy! I particularly like the ranch because it’s thick and mixes well with all the other flavors. It’s also the first recipe that I cooked the kale properly with (I usually make it raw because I can never cook it so it’s hot enough).

Finally, I was really craving a good delicious vegan Mac and Cheese but I was skeptical that I could find a good recipe for it. I hate most of the kinds I’ve tried so far, especially at some local restaurants where it’s popular (I won’t name names haha). I found a more cashew based recipe from Vegan Table by Colleen Patrick Goudreau and it was sooooooo amazing. I didn’t bake it but I bet it would be amazing baked. It gets even better as it’s reheated in leftovers.

This definitely gets a perfect rating! I’m so picky with vegan Mac and Cheese and this one’s worth it!