I’m on a quest to become a healthy vegan. Becoming a healthy vegan may not always mean the person trying to become healthier needs to lose weight, but for me it has. I started out obese, and a doctor’s visit before I went back to veganism showed that my cholesterol was high, and so was my blood pressure (for my age especially, which scared me, which is why I started this quest right away after realizing it all). So far I have lost a bit over 50 lbs, and am really happy so far with my progress. I want to share some ideas I have about how people can become a healthy/healthier vegan, based on what’s worked for me and also what I’ve read about and the information I’ve absorbed.

As I like to say, often when talking to non-vegans about veganism, it is entirely possible to be an unhealthy vegan. People seem to think vegan = healthy or vegan=skinny but that’s just not true all the time.  Just taking a look at all the mainstream brands listed here that carry “accidentally vegan” products will give you an idea of how that’s possible (note: I’m skeptical that some of these are completely vegan, as some may have bone char sugar used sometimes, etc so eat these at your own risk).  Plus, vegan companies (and companies that aren’t exclusively vegan but market vegan products occasionally) are often devoted to veganizing non-vegan junk food staples.

My philosophy about becoming a healthy vegan though is to not give up too much more than what I have to. I’m already refraining from dairy, meat, and other animal derived products (for many reasons- both ethical and health-wise), so having junk food in moderation, or a good helping of pasta (like the cashew mac and cheese I made the other day) once in awhile isn’t going to totally hurt me. Especially if you look at the types of foods I’d typically eat when not vegan.  I mean, if you want to totally cut out all overly oily, starchy, sugary, types of snacks and meals all the time, and stick to just the healthy necessities,  then I commend you! But personally I feel like I will be too grumpy without indulging sometimes. It’s okay to have treats as long as I don’t go overboard or neglect other healthier and important food groups.

With that in mind, I try to eat at least 7 servings of fruits and vegetables a day, but really, I aim for at least 10! The most I’ve ever done in a day since trying to increase my consumption of fruits and veggies is 15 (but I counted 5 of them from my shake, so maybe that’s technically cheating?) I try to have well balanced meals with every main food group involved but that can be difficult especially because I personally can’t eat 3 large meals only a day…I need to have 3 medium sized meals a day at normal mealtimes and about 3 other small meals (basically snacks…but not always junk food snacks) in between or I get too hungry and irritable feeling.

So, you may have seen it on pinterest or my facebook page (which by the way you should like it here if you haven’t already!) but a little while ago I illustrated a vegan food pyramid to put in a post like this.  I’m really excited about it because it looks SO AWESOME. I definitely put a lot of love and time into it. It’s not a perfect nutrition guide, but hopefully it can give you an idea of what a vegan food pyramid would be like, and all the different examples of awesome food we vegans eat. It’s not a comprehensive list of all the foods in each group, because, uh, the possibilities are so abundant and always expanding and I wouldn’t have room for that on a 8.5×11″ paper… (my hands would’ve hurt 1,000x more too after it was “complete” hehe). Anyways, without further ado (Please click on it to see a larger, more readable size): 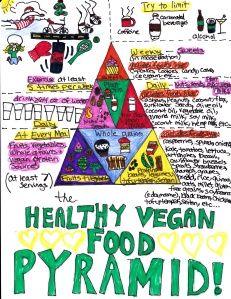 I can’t say I follow this perfectly every day, but I do make sure that I eat at least 7+ servings of veggies most days, and that basically everything else is met throughout the day. I just don’t necessarily make sure every meal is the way the food pyramid says to do it (I based/adapted my image off of a vegetarian food pyramid I saw on the back of a can of chickpeas). I have given up all carbonated beverages after reading in several places how horrible carbonation is for your body (never mind the artificial sugars or fructose syrup they’re often ladled with), only cook occasionally with alcohol (but never drink alcohol or do drugs!) and only have about 1 cup of coffee a day. These things are definitely good to keep in moderation if you  don’t want to completely abstain from them.  I probably should have had something about smoking and drug use illustrated too, because I don’t recommend that in order to get healthy either, but yeah! And I drink at least eight 8oz glasses of water a day (I’d rather get my calories from food, not drinks that neglect to make me feel fulfilled.) Also, exercise is so good for you! It helps me a lot with mood problems and has lots of other benefits for your body, such as ability to decrease blood pressure, lose weight, stay active and sharp-minded, have fun, reduce stress, combat depression, etc (the list goes on and on!)

In addition, there are some really great tools I have found. For me, it’s made sticking to my goals much easier if I track my food and exercise every day and am completely honest with myself about it. The best place to do it I’ve found, is a website sparkpeople.com. I love this site because not only does it have a calorie tracker, but it also takes some of the guess work out of figuring out a calorie range you need if you want to lose weight healthfully, has an exercise tracker and lots of exercise demos (both strength training and cardio), lots of ways to get support from people on the web (especially people like me trying to get healthy or trying to lose weight), message boards, health articles, recipes, etc! It can be a great way to get a fairly good idea whether you need to ramp up your B vitamins and other vitamins and nutrients because it keeps track of how much you’ve consumed through food each day. It’s the best. I recommend it to everyone who asks about what I’m doing or who talks to me asking for advice based on my success so far. The best part is it’s a completely free website except for the sparkcoach, which I don’t need or want…haha.

I also like some exercise apps on my iPhone, such as Runkeeper and Gympact. Sparkpeople has an app that is really useful, although that does cost a small amount to purchase from the app store. It has all the same stuff as the website has though, I just like it because I can track things on the go without having to go to the computer all the time.

Also, if you’re reading this as a non-vegan and want to know more about simply becoming a new vegan, here are two great resources I recently found:

Go Veg Guide (Vegnews Magazine)-for people ready (or who may need some convincing!) to take the Vegan plunge (in .pdf form)