Thank you everyone for being so excited about my ravioli post. It was my most popular blog entry yet!

This past weekend I went apple picking. It was really hot that day, so I actually had some frozen lemonade after!

I had actually been planning on this recipe in a vague form even before I decided to go apple picking. In fact, this is specifically why I wanted to go. Now I need to go apple picking every year, because I have realized fresh picked apples are so much tastier than ones bought in the store.

Of course, I bought more apples than I knew what to do with (figuratively not literally basically) so I had to make some things with them. I don’t know why I just said that because that was part of the plan, but it sounds better that way? Don’t mind me…

For the Apple Cinnamon Syrup:

For the apple cinnamon syrup:

To make the frosting: 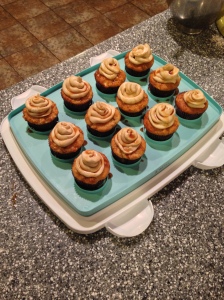 PS: Today I also made Isa Chandra Moscowitz’ Kale Salad from Isa Does It. It has butternut squash and lentils and the dressing is so good. I ate it with some Earth Balance Mac and Cheese. 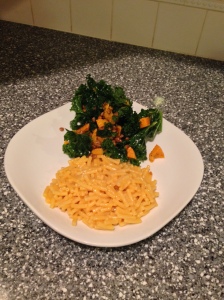