I’ve been so busy lately. Between graduate school, taking an improv comedy class, the holidays, my grandmother dying, etc., I’ve barely had time for cooking. I was able to create two Youtube videos in the beginning of the semester, which you can see here: https://www.youtube.com/channel/UCIGj10TPGenVBNH6vySDPpw! I hope to make more videos on Youtube in the coming year.

If you’re not on Instagram or following along here, I’m going to do a quick photo recap of some of the food I made for the holidays.

For some homemade gifts, I made my famous sour cream and onion kale chips, green tea, goji, and coconut superfood energy bars (adapted from this recipe), vegan and gluten-free marshmallow wreaths, and chocolate peppermint patties from a recipe that’s basically this (not pictured).

We had 4 relatives staying with us from Christmas Eve day until yesterday. My aunt and uncle and cousins have a tradition at their house of making appetizers on Christmas eve. So, I made lentil faux chopped liver dip, a spinach and artichoke dip, and we made mini potato latkes because it was also the first night of Hanukkah and my dad celebrates the holiday and loves having latkes. Instead of using eggs, we used the Neat egg for the first time and it worked out really well! There was also a salad made that I was able to eat. 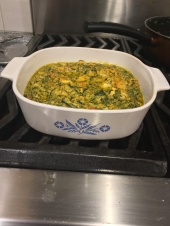 For dessert, I had these gluten-free, vegan sugar cookies I made from a recipe on Minimalist Baker. Check the recipe out here.

For Christmas morning breakfast, everyone else was having bagels. My mom was nice enough to go to a local gluten-free bakery and pick up some vegan and gluten free bagels. I topped them with Kite Hill chive cream cheese, my papaya lox, and capers.

For my dinner later that day, I made gluten-free, vegan stuffed shells with Kite Hill almond ricotta and pesto. I forgot to take a picture of them. We also had my favorite vegan caesar salad ever, which I also forgot to photograph, but believe there are previous posts on this blog about it.

It was a sweet Christmas! I hope you had a very merry one yourselves! As a thank you for reading, here is a picture of my three cats, that my brother photoshopped for a card.

However, the best Christmas present is that I have a new recipe! For a soy curl chickun potpie that is soooo good!

WordPress has a new feature here, so I’m going to try to see what happens when I upload a word document of the recipe.

soy-curl-chickun-potpie (link to a downloadable recipe? or something) 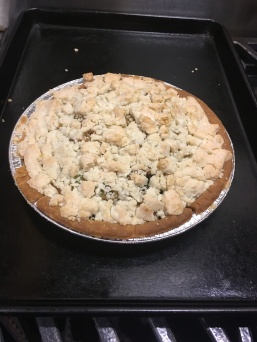 Enjoy the new year festivities if I don’t post before then (but I do have several posts lined up!) Happy Holidays from Banana Curl, Vegan Girl!

I am slowly making my way through the backlog of stuff I’ve been meaning to post! Soon you’ll also get to hear about a delicious raspberry cake batter smoothie I made and adventures in vegan Ethiopian cooking (a cookbook review).

Not too long ago I really wanted some comfort food, and I had been contemplating using the block of Daiya cheddar cheese I had in my fridge for poutine for awhile. So, I finally did it.

The gravy was spot on, but next time I will melt the cheese a little bit more on top of the fries in the oven so that when I pour the gravy on it all it will melt even better.

Here is the recipe:

Tonight I made this really good dinner for my brother and I! He said it tasted like it was from a restaurant. It was surprisingly easy though. I had bought this curry paste, pictured below, at Market Basket:

Which eventually became this:

Note: the curry paste is not mild in spiciness.

Tomorrow is the Summer Solstice and Father’s Day! I wish it wasn’t supposed to rain…:(

Saturdays are Soup, Salad, and Sandwich days! Here’s the first entry for a soup recipe!

This soup is the perfect sick day soup. The jackfruit shreds in the soup just like I vaguely remember the real deal to be like. You can add vegan oyster crackers and some nutritional yeast flakes into the soup like I did if you wish. It’s made in the crockpot to make it less time consuming and easier. It takes 6-7 hours to finish, so make sure you time it appropriately.

Enjoy! Hope everyone’s Vegan MoFo 2014 is going well! Thank you for commenting and being so kind. I try to look at other people’s blogs who are participating but I just started going to school full time and so I don’t have the most time to do that/remember. But I hope to be able to keep discovering more blogs that I like when I do have time!