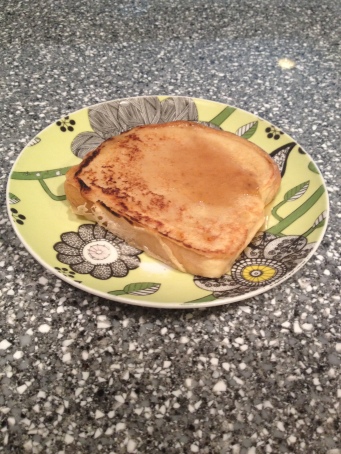 To be completely honest I really don’t like any of the vegan French Toast recipes that I have tried. They all call for chickpea (garbanzo) flour which can be difficult to get (never mind expensive!) and are kind of a pain in the but to make.

Instead of chickpea flour, I have my own secret french toast ingredient. It’s arrowroot. Long ago when I was starting out as a vegan, I read in one of the punk rock diy cookbooks I had (It was either Soy! Not Oi! or Please Don’t Feed the Bears…if you are familiar with them both you might see why I get confused about which one’s which sometimes) that arrowroot was a great vegan pantry staple ingredient to always have on hand. Unfortunately, it can sometimes be tricky to find in large quantities. However, I buy it in a big bag from Bob’s Red Mill online. Arrowroot is a cornstarch substitute, but unlike cornstarch, supposedly it is more easily digested. Plus, thinking about the cornstarch and water mixture I used to love to play with as a kid going into my body scares me…that being said, if you want to make this delicious French Toast recipe right away and do not have arrowroot on hand, go ahead and use cornstarch. It’s a fairly small amount, and works exactly the same.