I am still recovering from the weekend where I was very busy…I cannot believe it’s been a week already since the start of the Ladies Rock Camp. It went really well, especially the food, from my standpoint.  Well of course everything went well, but I was focused most on making sure the food was great, and I think it was.

Anyhow! I think I am going to play catch up a bit.

This week I made some Hawaiian Toast (Page 44) for breakfast and Texas Beefless Skewers with Chipotle Peach Glaze (Page 140) from Betty Goes Vegan, pizza english muffins and easy monkey bread (from the Vegan Stoner Cookbook, haha) with a friend, a really good salad several times, and a jackfruit/northern beans “tuna” melt. I don’t have pictures of the monkey bread and pizza English Muffins, sadly…

In weeks prior where I did not get to post, I also made:

and other stuff too, but that I apparently did not take pictures of or remember. Ooops.

Here are the details and evidence: 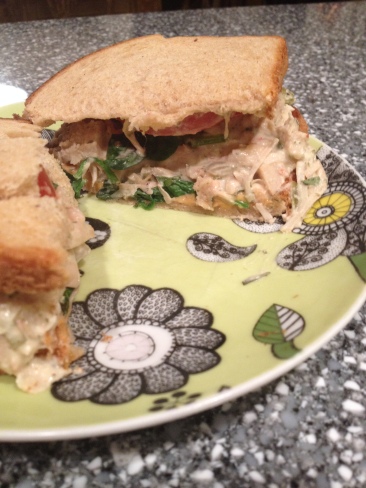 Bye bye, chickpea untuna sandwiches! This combination beats chickpea faux tuna sandwiches by a landslide! So good and a close flavor from what I remember! I didn’t add any salt and it was recommended to me to not use a whole lemon. I did not use the frying step as listed because it seemed fairly redundant. I just broiled some bread with spinach, tomatoes, and daiya cheddar on it and then put the still hot sandwich mixture inside. The un’tuna salad tastes good when cold the next day, too. Also, I don’t know how this makes just two sandwiches! It makes about 4 for me. If I piled the amount it’d take to halve the recipe on the bread, it wouldn’t hold it all. But this is probably one of my favorite recipes using jackfruit I’ve tried so far.

I rate this recipe: 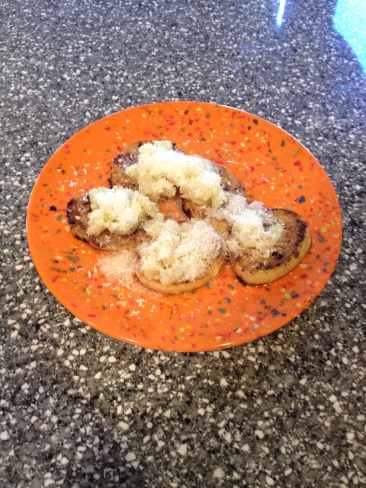 This cookbook has so many amazing sounding recipes, especially for breakfasts. This one immediately caught my eye when I read it. It has both a tropical and cheesy flavor to it, and works out really well when you follow the directions as instructed. I would not change anything about it! It’s so yummy. My non-vegan brother gobbled it up, and I don’t even think he likes French Toast type things much, but no complaints…This definitely deserves a 5 good banana rating! 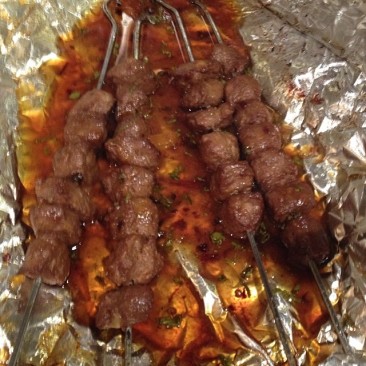 I used Gardein Beefless tips as directed for this recipe. It looks almost too real, which is slightly scary for me. They were oh so tasty, though! I made some cilantro lime rice with corn in it (a frozen prepared bag, haha) to go along with it and it was delicious! When I shared this picture on facebook, it seemed to get more “likes” than usual…I do not know if maybe it is because it looks so convincing as a fake meat, or what, but yeah…It was also pretty quick and easy to make. I am finding that most of the recipes I have tried so far in this cookbook are, which is great and a huge plus for me. The only thing I would recommend with this particular recipe that wasn’t mentioned in the book is to have a baking pan on the rack underneath in case the juices drip out…it was needed and I thankfully thought of it before it was too late… 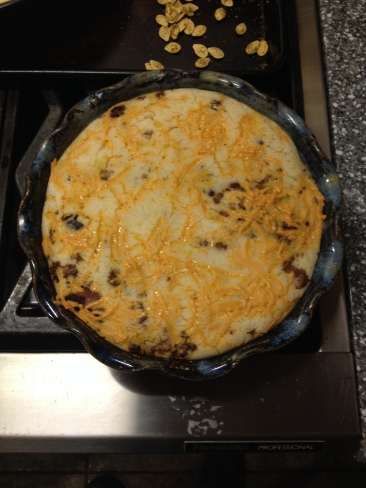 Well, this was amazing. I used Whole Foods Brand burgers and did not defrost them and they worked fine. The Bisquick and the ener-g egg replacer make this almost quiche-like…which I was very impressed with. I have not been too keen on ener-g egg replacer powder until I used this cookbook and particularly this recipe. I ate it with ketchup, dill relish, and yellow mustard. It was comforting. Amazingly, when I calculated the nutrition facts  it was fairly decent  (at least calorie wise, I was thinking this would be really intense). Visually it is appealing too as you can see, haha!

Finally, I amnot going to review them because I’m mostly tired now, but I will leave you with some pictures of the cupcakes for my birthday on October 29 which I neglected to blog about. They were from Chloe’s Kitchen. 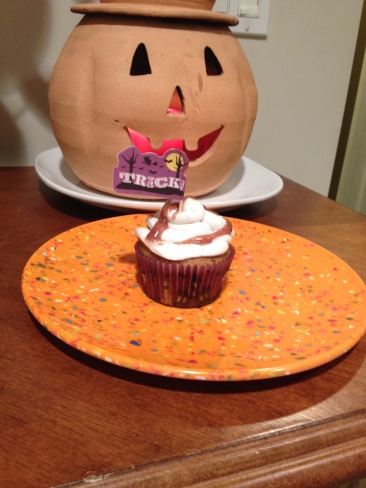 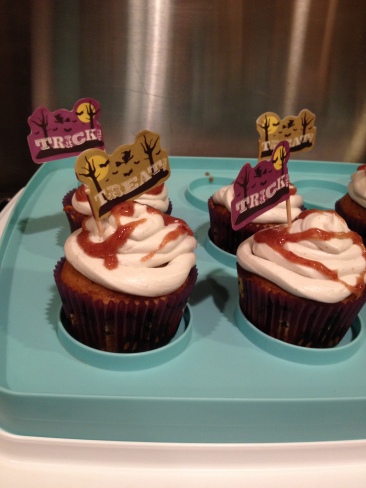