I have been trying to eat more healthfully lately. In fact, ever since I went gluten free I have found it hard to make up the ridiculously delicious recipes I was used to creating in the past. But today I dreamed up an idea for an amazing unhealthy sandwich that at first I was skeptical of being able to pull off to meet my needs. As I continued to think about it, I devised the methods that could make it healthier, and is the perfect combination of delicious, ridiculous, healthfulness, and satiety level!

This sandwich is a peanut butter and nanner sandwich, with baked vegan rice paper bacun, made with light tapioca gluten free bread, grilled in a panini maker. This definitely is not a very original idea, I’ve seen many a vegan version of this sandwich on blogs and in cookbooks, but this is my version!

It came out so well, that my panini maker has been given a new life outside of sitting in my basement!

Let me walk you through the steps, in picture form. It’s easy!

Bake the rice paper bacun. I did this recipe’s marinade, minus the ground coconut, soaked the rice paper strips in cold water, then in the marinade, and put them on a cookie sheet sprayed with coconut oil. Then I baked them in a 350 degree F oven for about 15 minutes, checking and flipping every 5 minutes (some got done sooner than others, when that happened I took the ones that were done out and put it on a plate while the rest continued to cook)

Take two pieces of Ener-g gluten free light tapioca loaf bread and spray coconut oil on one side of both slices of bread. Put the coconut oil side down on a plate.

Place one tablespoon of peanut butter on each slice of bread. 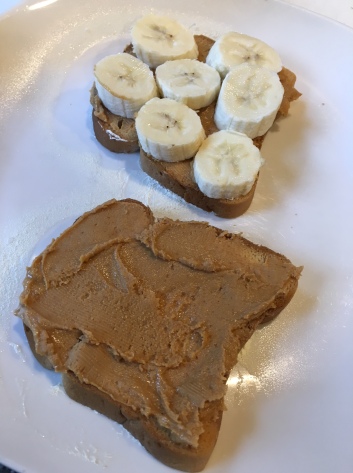 Cut half a banana into slices. Place on one slice. 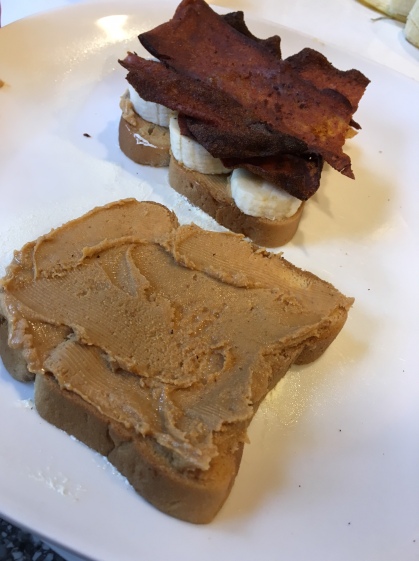 Place the sandwich into a pre-heated panini grill on medium high for about 5 minutes, more or less depending on your device (check on it). 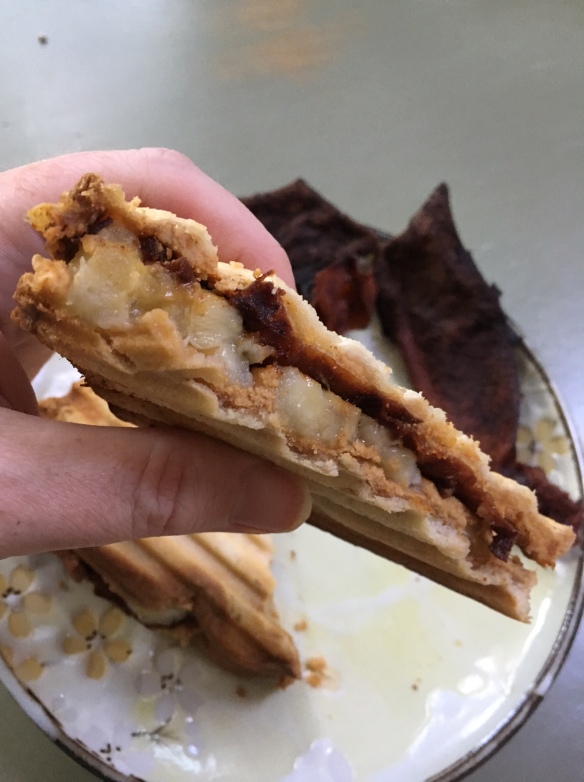 I was craving a chickpea salad sandwich but most of the recipes out there are all very similar–usually to make it taste sort of like a tuna sandwich–and I wanted something slightly different. So I had some vegan daiya provolone slices and tomatoes, and thought making an Italian flavored chickpea salad would be good. I decided to put it all in my panini press with some bread (duh). It came out really good, my only regret is that I didn’t put a slice of the provolone on both inside pieces of bread, because it would have helped the sandwich stick together better.

I made the chickpea salad in the food processor, and pulsed it to the point where it was the texture of a paté or thick hummus. I think it might be good if you process the sun dried tomatoes with the olive oil and spices and then add the chickpeas and roughly combine, especially if you want to eat it in a cold sandwich instead of a panini. Otherwise, just put everything in at once until combined.

For the Italian Chickpea Salad:

(Makes about four 1/4 cup servings, or one cup total when fully processed in the food processor)

1-15 oz can of chickpeas/garbanzo beans, rinsed and drained of water

5 sun dried tomato halves (I used ones without oil)

2 Daiya Provolone slices (I found them at my local grocery-Stop and Shop, in the organic refrigerated section! I believe Whole Foods sells them, other grocery stores may be more difficult to find…I believe someone near me requested a lot of vegan stuff at my grocery store and they were a huge success so they are stocking a lot of awesome things now!)

Here are links to the companies whose products I used in this recipe and a little review:

It melts perfectly as do all their cheese slices, but the flavor isn’t exactly spot on.

I give their nutritional yeast a 5 good banana rating! It’s the best tasting Nutritional Yeast (also known as “Nooch”)  I’ve tried, and I can be quite picky with it.

See you later in the week for a cool new post about health with some awesome illustrations, and another cooking post! Until then…