I’m still kind of super tired, I guess my cold is not totally gone and it’s upsetting to me a bit.

So I apologize, but I’m going to try to get through posting this fairly quickly so I can go to bed early, haha.

This was one of my better Vegan Thanksgivings though. I ended up making a Tofurky roast feast in the crockpot with this recipe. I also cooked up the gravy that came with it. My grandmother brought some jarred pearl onions and we cooked them with some pepper, paprika and earth balance. I don’t know why, but I always liked that, it’s simple and really good. Probably the most elaborate thing I made, besides the pumpkin pie I ended up making, was the green bean casserole. It was well worth it though, it was quite tasty. Actually, I had been worried about it because I thought it might taste too parsnip-y, but it balanced really well. I only put 1/2 tsp salt in it total, though, and it was fine. The recipe calls for 1 1/2 tsp! No way. I’ll definitely be making it next year, though (well, if I decide to make a green bean casserole…and other factors…heh).

Additionally, I made potato latkes for Thanksgivukkah. I also made Baba Ganoush for an appetizer. I don’t think I can link the recipe to it though, I found the recipe that I had printed out awhile ago and have no idea where I got it from now. But it’s quite tasty. You roast 2 eggplants with some garlic (you put the garlic on it halfway through cooking the eggplants). Then you use the roasted garlic, sesame seeds, sunflower seeds, olive oil, salt, etc and make a paste in a food processor, then add the eggplant and combine.

I know I had said I was making pumpkin pie graham cracker squares for dessert, but I ended up getting the Eat To Live Cookbook I had ordered and they had a fantastic sounding pumpkin pie that I decided to make instead. So I did. It’s sugar and flour free, which is awesome. It’s sweetened with dates instead. Aside from the fact that the crust is made from almonds, I couldn’t tell any other aspect was done differently than the traditional recipe. It was soooo good and I liked the cashew cream to put on top but I should have made a little less since I ended up giving a lot of the pie away without it so that I wouldn’t end up eating the whole thing myself (my family is not big on pumpkin desserts for some reason, but I am…)

My meals leading up to Thanksgiving basically just consisted of two things:

Pumpkin Echiladas from the Vegan Stoner Cookbook, and Green Bean Casserole Pizza from Bake and Destroy. 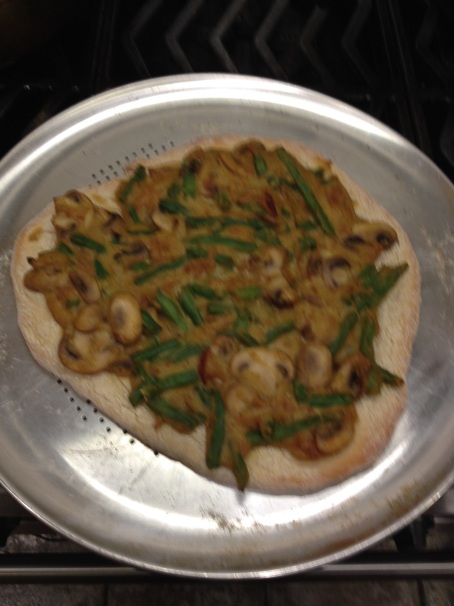 I hope you all had a very Happy Thanksgiving, or Thanksgivukkah (Hanukkah…although it’s still happening…) if that’s your thing too. I was very glad to have a cruelty free and vegan Thanksgiving for myself once again, so I’m going to leave you this picture of me in my majestic Compassion Company Thanskgiving t-shirt. 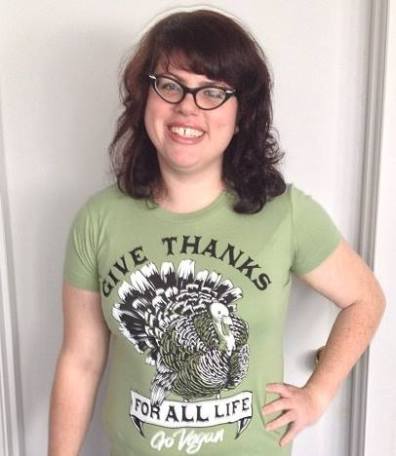