Oi. So the school semester finished Sunday the 21st and I was a bit of a mess. After that, I barely stopped. It was a whir of wrapping presents, menu planning, grocery shopping (multiple times, ugh), spending time with family, cooking, etc. Since then I haven’t really stopped either, until today…Thank Goodness.

Remember my menu? I stuck to it pretty closely with a few adjustments.

My mom actually made the salad and the eggplant Christmas Eve which was great. She actually helped so much with the cooking which was a big relief because even as I write this now, I still feel like I am recovering from being so stressed during school.

First, we had the greek salad: 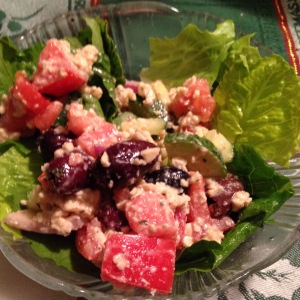 Isa Does It Greek Diner Salad

Then we had the main course, which for me was a piece of Spanakopita pot pie and the eggplant parm. 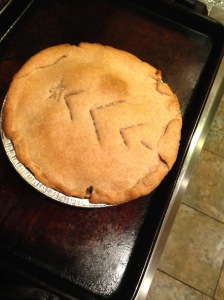 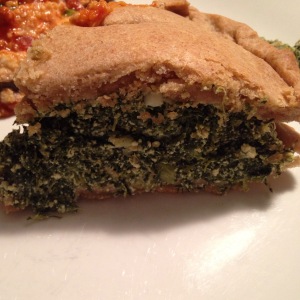 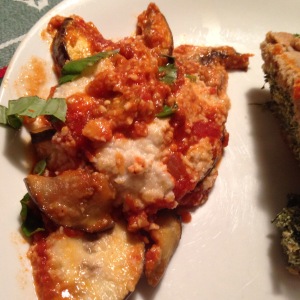 The dessert I was making for Christmas Day got screwed up because my mom was trying to teach me a trick with the roll cake but forgot how to do it the correct way and it fell apart 😦 So we decided to save the mud pie for Christmas day, and instead would have the vegan peppermint stick ice cream I had made…The frosting for the cake was already made, so we ended up making some of the crumbled up cake, ice cream, frosting, crushed peppermint candies, and chocolate syrup into sundaes. Everyone was obsessed with the peppermint stick ice cream, and I really don’t blame them! It was so good. It’s been requested that I make it again. 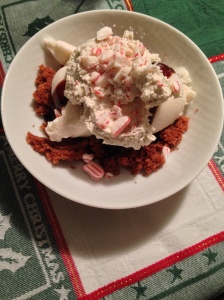 Then on Christmas morning we had my famous pretzel bread pudding for breakfast: 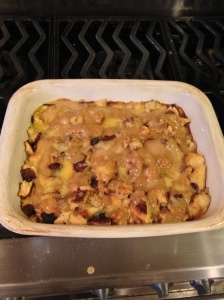 For an appetizer I made the Hummus Pomodoro with Warm Pizza Crust from Chloe’s Vegan Italian Kitchen which was so good. Everyone really loved it, and my grandmother was telling me I selected some really good tomatoes, haha. 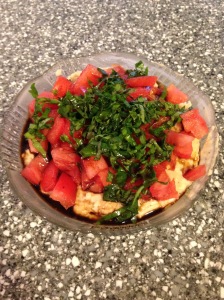 For dinner, here was my plate: 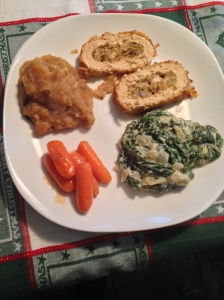 And for dessert? Well, my grandmother decided to leave before we had it, so while I was waiting for my mom to take her home, I ended up whipping up a surprise. I had so much frosting leftover from the botched cake that I decided to make whoopie pies: 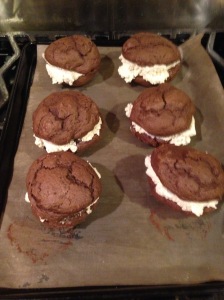 Whoops, I made Whoopie Pies

And we ate them along with the mud pie! (two gross but delicious sounding “pies,” haha) 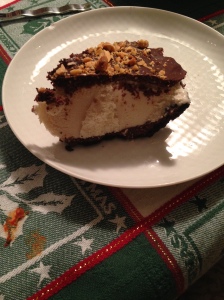 This was also the first year I barely got any cooking related gifts.  Believe it or not, I’m okay with that. This is because:

A) I have way too many cookbooks and am now trying to make my own cookbook zine so I’m mostly eating my own creations.

B) I have pretty much everything I need in the way of utensils, though I did get a new measuring cup set and a cool little frosting thingy for decorating cakes and stuff in my stocking.

C) I am trying to also eat a bit healthier, so candy and junk food isn’t wise. Although, I did get a package of peppermint Bark Thins and Supercandy (they are vegan and basically gum drops with tons of B vitamins in them) in my stocking.

D) Apparently my love of working out has almost overtaken my love of cooking, at least, gift wise. I got some cool workout gear this year!

I do hope to use the two Whole Foods gift cards I got for presents for some food-related goodies/healthy foods! Yay.

Happy holidays everyone! I will probably not be posting until after the New Year, so I hope you all have a happy one!