Awhile ago, I was having a conversation with a friend whom I had not talked to in a long time, but we are friends with each other on facebook. She said, “this is your year.”

I told her I didn’t want just this year to be my year.

I actually think this next calendar year will be even better! I have a lot planned for it. But really, I think each year can get better and better, considering all the things I have accomplished this year, and how much my attitude and mindset has changed!

In 2013, starting in April (I’m not one to care about new year type things really, I need more personal reasons to make change in myself), I have gone from being very unhealthy with my food choices, to being a conscious, healthy (with unhealthy vegan food in moderation, which I personally feel is important) vegan. I have lost 65 pounds. I have made working out a routine. I have tackled many of my fears, for example, being afraid to run, math, making up my own recipes, etc. I have started this blog and though I don’t write in it as much as I’d like to or as much about what I want to write about, I keep up with it and do it. I have even improved my health in measurable ways, like my hemoglobin a1c levels, my bmi, my blood pressure, my cholesterol, and my iron levels (they were very low). I took on an important role in an organization I love and that empowers me and makes me feel all warm and fuzzy (Girls Rock). I have tried to make practice of being more creative and doing more awesome things. I am starting to work on having a better social life, something I’ve been neglecting to do for awhile.  I accidentally discovered a recipe I created two years ago was semi famous. And other awesome things I am forgetting or not putting a priority on.

Next year though, I believe will be even better. I will graduate a college program, something I have been longing for a very long time but never quite achieved. That’s a big one for me. I would like to see if maybe I can win the contest to speak at my graduation, but that’s not something I can control the outcome of (I also think I might start bawling if I started to speak about all the things I’ve accomplished during my time in school. It’s one thing to write about it, but to speak it? heh). I will continue to write in this blog.  I plan to either start a new college program, or begin to work on my career goals. I will volunteer at an animal shelter (which I’m actually starting this year after finals hopefully). I will be a vegan for the longest stretch of time so far. I will continue to be a healthy person and have goals for that…including running a 5k by the time I turn 30 on my Birthday in October (or thereabouts), and starting to lift weights. I will have stronger relationships with my friends. Most importantly, everything about me will get stronger. My mind, body, everything. 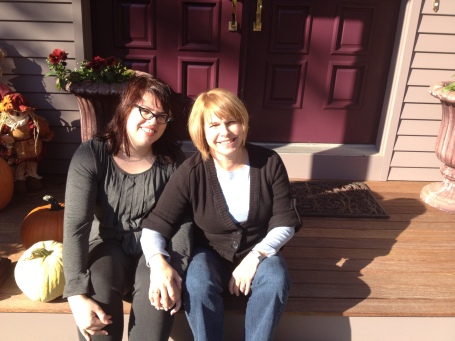 My mom and I! She’s a big supporter 😉

I am sharing this because maybe someone is reading my blog and is feeling badly about their ability to meet their goals, or get healthy, or change their bad habits, or whatever else. I want to inspire people, that’s my primary goal. Well, that and help as many people as possible. If 2013 is the year of the Laura and 2014 will be an even better year from what I can see and so on for the rest of my life, then other people can do the same thing! I don’t want to spew too many cliches. But really, believe me when I say that anything you put your mind to is possible.

Okay. Now here’s the part where I talk about what/who has helped me out when I thought I couldn’t do it. I’m not going to mention everything, but there are some clear, concise things I want to share that everyone can use if they want to.

Mostly it’s just support from other people. Like especially my mom, my aunt, my friends, mentors, doctors, etc.

Also myself, which I’ve already alluded to. Like really. It’s all about my mindset. I watch the Biggest Loser sometimes on tv, and I would tell myself I am my own biggest loser, as silly as it sounds. Actually it’s not really silly. It’s true. I did it without having to go on a tv show that’s actually pretty extreme and a last resort kind of thing. Or, I’ll be my own therapist sometimes, by anticipating the advice another person would give me, but instead it’s me giving myself actually helpful advice, and then just doing what the advice tells me I should do instead of waiting to feel bad I haven’t done it, or have someone else telling me to do it. Like today, I beat my own personal record for running. First of all, I walk and run in intervals, and I keep track of my progress with an app called Runkeeper. Usually I have been setting my activity to “walking” but today, I was like “okay I am going to run!” and set it to run. And I ran. I ran as far as I could for as long as I could, as fast as I could, until I needed to walk, and kept going for 45 minutes. Plus, I set a goal to run faster than my usual record when I was walking more. I wanted to go just under 13 min/mile. Instead, I ran 11:51 min/mile! I was proud and sort of in shock. But I am not surprised. If someone else could hear the awesome things I was telling myself while they were running, I bet they’d do just as well (considering some factors, of course).

Another final thing I want to mention, to make it more inline with the purpose of my blog which is spreading, sharing, and showing the awesomeness that comes with being a vegan is this facebook group I belong to. I really like to follow the work of Christy Morgan, author of the Blissful Bites cookbook, and awesome athlete/vegan educator extraordinaire. After commenting on one of her photos on instagram, she asked me if I belonged to her vegan ladies who lift facebook group. I was hesitant because I don’t think I am ready to be lifting weights quite yet, but she still encouraged me to join. And it’s one of my favorite vegan facebook groups! It is so supportive and everyone there is awesome. Not only do I get inspired by so many other strong vegan ladies, but I can also inspire others there. And it’s very informative and just…really cool for lack of a better description. So, I highly recommend it if you’re a vegan lady and interested in also getting stronger.

Okay, well, sorry this isn’t about food this time! But I hope this is just as tasty a read as any of my other entries. And I hope you were inspired in some way from my story. Here’s to having each year be the year of us for a very long time!