Apparently vegan seafood is my specialty. And why wouldn’t it be living in New England? I’ve made vegan shrimp bao, lobstah salad, vegan scallops wrapped in tempeh bacon (that was actually featured on the Bake and Destroy Blog for Superbowl recipes), papaya lox, and probably more that I am forgetting! I’ve fantasized about making a vegan New England Beach food truck more than once…

Today I decided to veganize a Rhode Island (my home state) favorite seafood snack, the clam cake. According to Wikipedia, “Clam cakes, which can also be called clam fritters, are a New England food, most commonly found in Rhode Island.” I didn’t really eat these before going vegan, but from what I know, these are not a “cake” in the way you’d think of a crab cake or whatever (which can also be veganized–check out this recipe I love). They are more like a fritter or even a weird type of fried donut.

I made these with dried reconstituted shiitake mushrooms in place of the clams. They were pretty darn good!

I served them with some vegan Tartar sauce (relish and Just Mayo), and my favorite new thing: Broccoli Fries, They’re french fries with broccoli in them. I threw out the bag and the trash went out so I can’t tell you the name of the brand that makes them currently…I’ll try to remember to share this some other time.

Here is the recipe!

Here are some more pictures of the process:

After the Shiitake are reconstituted and drained

The batter minus the shiitake

The shiitake all chopped up

I haven’t gotten a chance really to look at many other people’s MoFos because of my workload lately 😦 But I hope to be looking a bit more this weekend *fingers crossed* If you’ve been participating with your blog, and you want me to check it out, be sure to comment on this post (and/or tomorrow’s) so I remember to look!

Last night I bought some pre-sliced papaya because I wanted to see if I liked it without buying a whole papaya. I don’t think I have ever had it before or if I have I don’t remember. When I got home from the store, I tried a slice, but I didn’t really like it. However, the color, texture, and lack of distinct flavor led me to believe I should try making a vegan lox substitute. So, I began to make a marinade for it and began experimenting. The results were pretty great!

First you marinate the slices for about an hour in a mixture of stuff (see my recipe below) in the fridge, then you bake it at a low temp of 200 degrees F for about 5 minutes, turn up the heat in the oven to 250, bake 10 minutes, flip, and bake for 10 more. Then you will have the perfect faux lox to put on top of bagels and vegan cream cheese. I’m also going to try making it in the dehydrator I think. I’ll post more about that if (when) I do it. 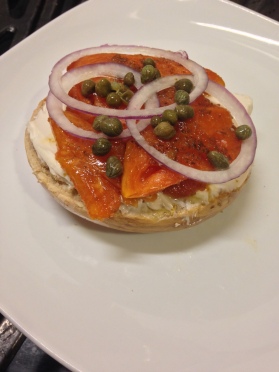 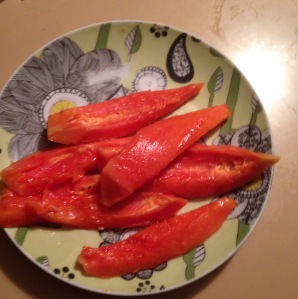 Raw papaya before being used 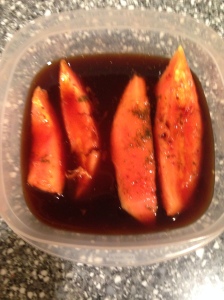 the papaya in the marinade 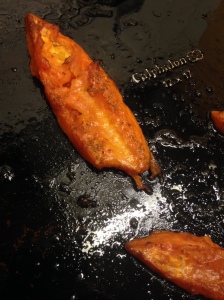 The papaya after it’s been cooked