This quick and easy recipe also happens to follow yesterday’s theme, which is something I grew up with as a kid. The recipe is also in my zine. See yesterday’s post for details about that.

This recipe is simple and can be gluten free if you use gluten free english muffins (I like Ener-g, they remind me of brioches a little bit!) If you don’t like almost raw onions, however, I do not recommend you try this! But if you can tolerate them or like them, I definitely recommend you keep an open mind! It sounds a little weird, but it’s one of my favorite snacks/easy small lunches.

Today’s prompt is to recreate a meal from my childhood. I’ve actually already done that multiple times, and wrote about the stories behind them, in my zine that accompanies this blog! 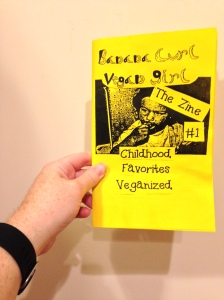 You can buy it from my Etsy shop here. Please keep in mind, that I wrote these recipes earlier in the year, before I went gluten free, so almost all of the recipes are made with gluten, many are not very easily adaptable either. I can no longer eat most of them either. Such sadness.

But, if you can eat gluten, here is one of a few recipes I will be highlighting from the zine this month!

This used to be our favorite meal in our family, until my mom became allergic to milk. For awhile my mom would make it for us on special occasions, or if she couldn’t eat. Since going vegan, I remade it! It came out just as good, and healthier of course. My mom still couldn’t eat it because she can’t have soy. And now I can’t either until I find a good gluten free substitute for the Gimme Lean. Maybe that’s next on my recipe agenda… 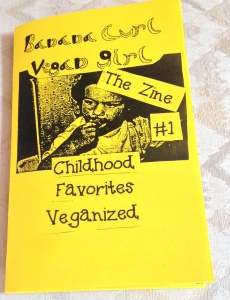 You can buy it here on Etsy (but if you live in RI email me first at pleasinvegan@yahoo.com before doing so, because we may be able to arrange a pickup or something so you don’t have to pay/wait for shipping)!

I was selling these for donations for Girls Rock RI at Ladies Rock Camp this weekend. Maybe you’ve seen my posts about it in the past, here, here, and here. You can also see this video of me during the camp, where I gave a speech about being food coordinator and some other fun stuff. I love this organization!

Here are some cool pics of it there!

Also, this is so cool! It’s the shout out wall at camp…

Hi! I’ve been gone for awhile. The reason for my absence has been because I have been putting most of my recipe energy into working on the cookbook zine, school, and am also planning food for another Ladies Rock Camp! Speaking of which check me out in their volunteer spotlight!

Valentines day has come and gone. That day I cooked up a storm. I veganized our family’s brisket recipe using seitan for my zine, I made heart shaped frosted sugar cookies, and I veganized a recipe for Portuguese muffins.

I used this recipe (although I changed the icing recipe a bit to add raspberry juice and almond milk).

I have been craving them badly lately, but they are not vegan. They contain milk and eggs.

So, I adapted this recipe to become vegan.

These are the ingredients I used:

You basically follow the directions on the recipe exactly, although ignore the parts about how much it should rise as I don’t think it really did the amount it said it would and they still came out alright.

If you’ve never had them, now you can try them vegan! If you have, enjoy the comforting flavor of sweet bread again!

Hi all, it’s been awhile since I have posted anything. I’ve taken a sort of unofficial break to work on some other stuff.

Things like my running blog, actually training for a half marathon, and my Banana Curl, Vegan Girl cookbook zine that’s all my favorite recipes from my childhood. I hope to complete it and start selling it by March. I’ve also started a new website, but haven’t done much work on it yet. It’s not ready to share yet, but I plan to have it be an informational website for vegans of all levels interested in various topics around veganism for social justice and support for people who want to become new vegans. I’m really excited about it, but I have to be patient and keep it secret for now while I’m working on it.

In the next few months or so I will be trying to post new recipes more often as I’ve gotten a bit out of habit with it. I will be sharing recipes I’ve created for the zine too to get you all excited about buying it when it comes out…(It’ll be cheap, like 2-5 dollars I think).

One of those recipes I’d like to share is my recipe for Vegan Hibachi. I loved hibachi and other Japanese foods so much growing up as a kid. We had this restaurant in Providence called Fuji when I was very young in Providence that we would always go to. We went there so often that we got to know the family who owned it really well. Their daughter even came with us on a trip to San Francisco. Unfortunately, it went out of business years ago, but I still have fond memories of it. They always gave us Botan Rice candies as a treat when we left, which I still love (and they are vegan too!) It wasn’t a hibachi restaurant. It was more traditional.  After it went out of business we often went to Hibachi restaurants. I feel like trying to recreate a dish from Fuji I would never get right, and would not do justice to. So, I have settled on making yummy vegan hibachi.

This recipe consists of 4 major steps, but with some planning I am sure you can pull it off! Make the Yum Yum dipping sauce and baked seitan the day before, then prepare the veggies and seitan and mushroom hibachi right before serving.

If you like or dislike this recipe, please tell me why in the comments. And keep an eye out for the zine that will have this recipe inside!! 🙂 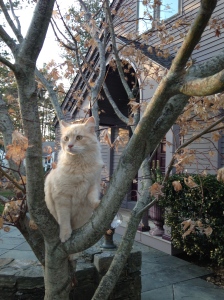 Ps: here is a beautiful picture of my cat, Franz, that I took recently and wanted to share. Isn’t he cute?

I have started to train for a half marathon. Don’t ask me why I am thinking this is a good idea as Winter is just about starting, but regardless, I am.

In response to my training I have decided to start a blog where I document what I am thinking about while on my runs. Sometimes I think about some really interesting stuff, other times not so much, but either way I thought it would be cool to see. I hope to inspire people with the way that I share my thoughts and that’ll encourage them to tackle things they think are scary but want to do anyhow (like how I did with running).

You can check it out here at http://streamoflaura.net

Over my winter break from school I’ve decided to produce a cookbook zine. I am hoping it will be ready to go by January 20, but we shall see! It’s going to be chock full of kid-friendly recipes, since it is about my favorite recipes that I grew up with turned vegan, and the memories I have about them.

For a project with school right now, I am designing a series of posts for this blog about Labor History for vegans. I hope to educate my readers about issues of labor in our food choices and how we can understand labor issues past and present and consume foods that are not just helping save non-human animals, but also are treating the human workers that make our foods nicely and honoring their rights. Look for that, as well as some more educational topics I will be exploring soon!