I had a really hard time thinking of what kind of a dish I could deconstruct and be in line with the unicorn theme. In fact, I wasn’t really 100% certain at first what a deconstructed dish was or why it was considered “hipster.”

I had decided a while ago, that for today, I’d do some kind of post about coffee since I feel like hipsters are gourmet coffee snobs. I was even going to try to make a vegan version of bulletproof coffee or whatever–you know the kind that people blend butter into? But, I got stung by a bee in my finger yesterday and was in no mood to do so this morning, especially since the reaction I had made my stomach act up for some reason. I guess we can’t all have the constant positivity of a unicorn.

I did, however, want to share this really cool company I recently found that makes deliciously flavored coffees. I emailed them when I found them to verify the coffee was vegan, and they said all their coffee is, even the ones that say the flavor is some kind of “creme”. The “creme” flavors are actually made with soy according to the person from their company that emailed me back.

The company is called Coffee Shop of Horrors, which is perfect for this time of year. They are based out of Florida.

Anyways, I was super excited because they have a coffee flavor I’ve been wanting to exist for a long time but had never been able to find. Peanut butter cup! It was delicious, we just used the bag up today. And I also bought a waffle and syrup flavor which I am excited about trying and this toasted coconut flavor: 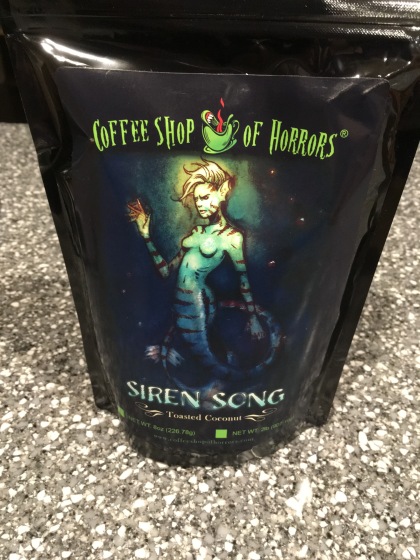 Which, although it is not a unicorn, is a siren/mermaid creature, which is also pretty mystical and rare.

Then I realized earlier this week, that I accidentally made a salad from the cookbook Salad Samurai by Terry Hope Romero and it was basically a deconstructed samosa.

So, there you go #VeganMoFo, hipster food in a deconstructed dish. It’s not in line with my theme, but, yeah. Oh well.

Oh, and I might not be posting for the next two days or so. Tomorrow (Saturday) I am going to Boston Vegfest and Sunday I was planning on having a break, but who knows for sure. You’ll probably get some kind of information or recap from VegFest at some point.