HAPPY 1 YEAR ANNIVERSARY (or thereabouts!) to my BLOG!

I am so excited to be participating in Vegan MoFo 2014 as a celebration. I have come along way since starting this blog. From being so afraid to make up my own recipes (literally shaking while my first real recipe was in the oven!) My recipes at first did not usually come out all that impressively. But now I’m excited to be having some really delicious things happen, and recipes becoming the biggest focus of my blog. Since I’ve tested a lot of the recipes I created for Vegan MoFo already, I know you are all in for a big treat!! I can’t wait to see what this next year of blogging brings!

So Fall is just around the corner and I wanted to make a new smoothie that features a famous Fall ingredient aside from pumpkin—cranberry sauce! The cranberries do not overpower this smoothie and are not the most prominent flavor. Overall though, they make the smoothie sweeter and give a unique, comforting taste. The flax gives it some Omega 3 vitamins, something I’ve been trying to incorporate into my cooking more but haven’t been able to find many ways yet besides smoothies. 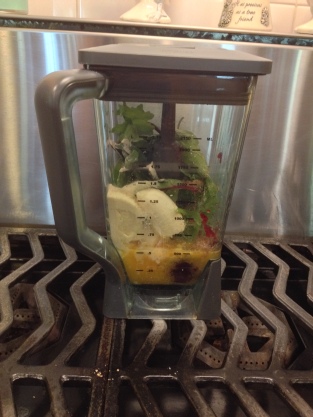 I was sick this week with a pretty exhausting cold. I’m feeling much better now, though. Since my exhaustion and my lung congestion made it difficult for me to work out, I decided I was going to try and eat much better than usual and eat more fruits and veggies than normally (even though on average I get at least 10 servings a day or so) and so I finally gave in and tried some green smoothies. I think I’m going to be better about eating more fruits and veggies (Including green smoothies) from now on even though I’m not sick, because… duh. I also ate a lot of Amy’s No Chicken Noodle soup, which was awesome.

I had to add a lot of extra water because it came out way too thick. Also, I gagged several times still, and it sort of tasted like a salad dressing or something to me, oops. But I thought it was decent at first, since I had never had one before, that is, until I tried the Caramel Apple Green Smoothie from the recipes here. That one is by far much tastier. I used almond butter instead of sunbutter though. I don’t have a picture of that one, though. 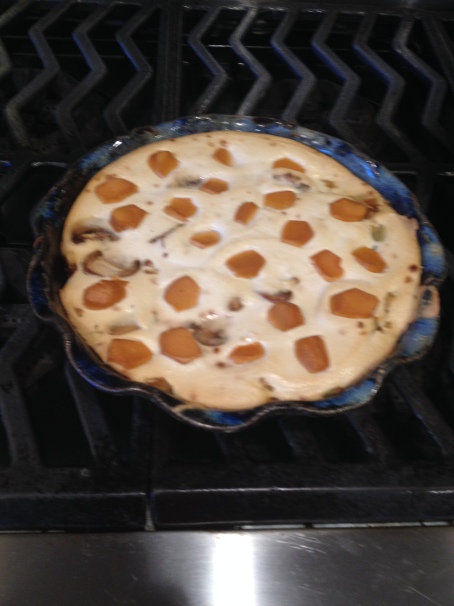 Next was the Holiday Pie from The Vegan Stoner Cookbook. It’s basically tofu and non dairy milk blended together, mushrooms and garlic cooked in soy sauce, prepared stuffing, and I decided to use the optional tofu hot dogs on top. I also dipped it in cranberry sauce. It was quite delicious.

I rate this recipe 4 good bananas, one bad! (It just didn’t have the total wow! factor of 5 good ones, but I like it)

Then there is this salad I made tonight! 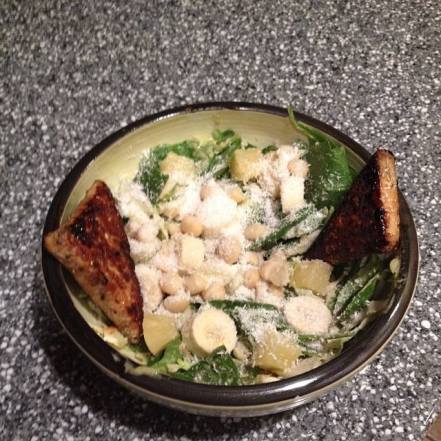 So good, and made me think of fond memories from the Summer. I didn’t think bananas would be so tasty and add such a great texture contrast to this but it was definitely the best part for sure! Everything tastes so good, though! I also majorly splurged on a small amount of macadamia nuts which are so yummy, and added reduced fat dried coconut. The dressing is creamy and super tasty, the tempeh has great flavor, and all the fruits along with the spinach and cole slaw mix are wonderful together.

This has to be rated 5 good bananas!

I’m hoping this upcoming week I’ll have time to write some more fun entries besides just on Friday, but we’ll see what my life has in store from me. Until then take care and eat yummy foods!